The e-Signature Building Block (BB), which is one of the key building blocks of the e-SENS project, aims to establish cross-border interoperable components for a secure authentication infrastructure in different domains. e-Signature is one of the Digital Service Infrastructure Building Blocks (DSI-BBs) of the Connecting Europe Facility (CEF) programme. It is part of the “electronic identification and authentication” DSI-BB, defined as “services to enable cross-border recognition and validation of e-identification and signature.” An electronic signature is defined as “data in electronic form which are attached to or logically associated with other electronic data and which serve as a method of authentication” (Signature Directive 1999/93/EC). The main purpose is to bind an e-Document to an entity so that legal value is associated.

Many European states have defined various forms of e-Signature solutions. With the upcoming eIDAS Regulation, the provisions of e-Signatures legislation that were originally provided by the Signature Directive will be amended. The e-SENS e-Signature building block is based on and will support eIDAS as a policy basis.

The general architecture of e-Signature is shown below. 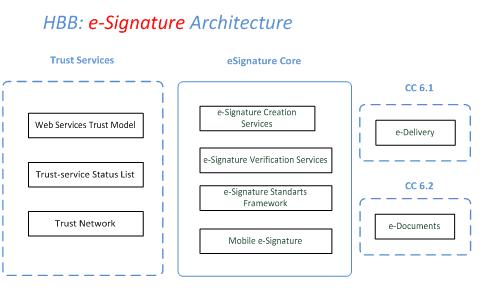 As e-SENS e-Signature services must be trustworthy, the e-Signature BB has close interaction with the Trust Services BB, which establishes trust and confidence between cross-border services including e-Signature. The Trust Services BB supports different trust models, namely the Web Services Trust Model, Trust-service Status List and Trust Networks for PKI and Mutual Recognized Certificates, which may be applied as alternatives or even be used in a hybrid manner, depending on needs.

Furthermore, e-Signature is related to the Traceability BBs, which are a set of tools and techniques used for tracing users’ transactions, for example. Traceability consists of the following ABBs: